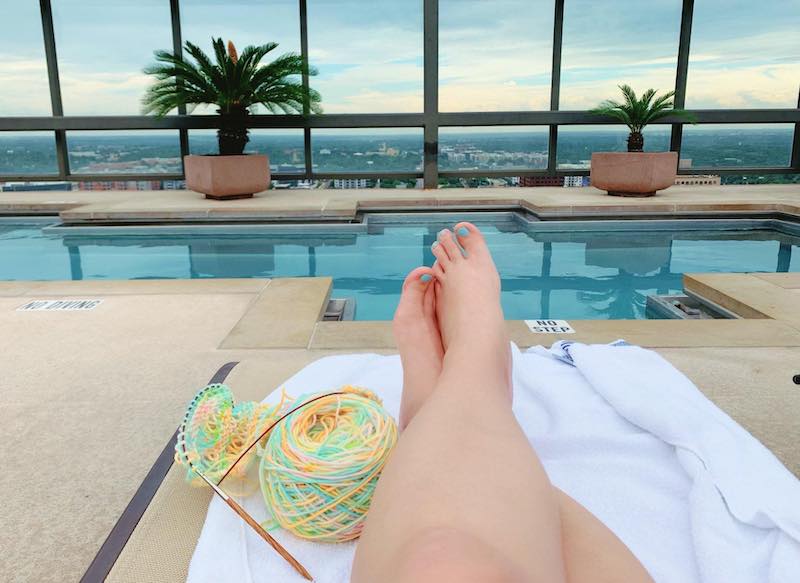 This week, knitting made national headlines and even landed on the late night talk show circuit when Ravelry (the site we all use for patterns and posting), took a stance banning political content. How people even managed to work hate-speech into knitting is beyond me, and it’s unfortunate, as I have always experienced this community as a safe, neutral space focused on crafting. This is not a story about the ban, though, so please keep reading no matter where you stand politically.

I was watching Stephen Colbert’s three-minute bit on the news, and while it was hilarious, I think I speak for all of us when I say I could have lived without his depiction of a knitter as a hunched over old lady who only makes “socks that are too big” and collect dust. Yikes.

I’m going to be 30 years old on Sunday, and I learned to knit about 18 months ago. It is one of the best things I have ever done. I’m kind of obsessed. I have more yarn than one person could use in a lifetime, and have made over 100 garments that I wear, gift, or donate. I have a ridiculous Excel spreadsheet containing projects and patterns I want to do immediately, less immediately, and in three months, all paired with yarn. My rescue dog Wiley models my knitting on Instagram (@WileyGoneWild) and it’s kind of a hit. Last I checked, Instagram was not an app put out by AARP. It is an absolute joy in my life.

Yes, when I knit, I look for patterns that are new, edgy, and fun as well as the tried-and-true favorites we all use for shawls, scarves, tops. I look for garments I can pair with my *trendy* native New Yorker wardrobe. I favor sparkly yarns, I run some yarns alongside metallic thread, I love yarns with beads, sequins, splatter and speckles. I like them to express my style and I like to make things in the styles I think other people would like as gifts. I think that’s how we all roll.

Not that it matters, but I don’t even know how to make a sock.

A social network for knitting enthusiasts is taking a stand against white supremacy.

Posted by The Late Show with Stephen Colbert on Wednesday, June 26, 2019

It’s likely safe to say that we’re all cringing as we watch the above and aforementioned clip depicting “the knitter” a certain way and devaluing the things we make—things that “take forever” and are “lumpy.” When did this rumor even get started?

The reality of it is a whole other thing. Look at designers like Stephen West, who is creating a colorful revolution on his coattails. Or stop by the knitting group where I learned to knit— they regularly teach knitting to young sober women and men coming in from rehabs or halfway houses—dudes with heaping muscles covered in tattoos, by the way. Look at the various pattern makers and indie-yarn dyers on social media and other sites, in Facebook groups and in knitting circles. We aren’t permanently wedged into rocking chairs while soaking our dentures.

The stereotype isn’t just kind of insulting, but it’s potentially harmful, as it is an amazing asset to people in all forms of recovery—people of all ages, gender identifications, and sexual orientations.

If you know me, you know that I am in recovery from alcoholism (almost eight years) and Post Traumatic Stress Disorder, and wrote a book about it. Knitting has become a crucial tool for me when it comes to maintaining a happy place for my mental health. I was familiar with the benefits of left-brain right-brain stimulation and activation after doing EMDR therapy to target and process trauma—so I understand the science of how bilateral activities like knitting can be healing.

Many medical studies exist that back the science behind how knitting can help us feel calmer and happier, and other studies have found that people who engage in hobbies like knitting have better overall cognition and decreased rates of memory loss. It also soothes anxiety and is known to lower blood pressure. These are afflictions that can potentially affect us all, regardless of age.

The women I’ve met over the last 18 months, no matter what their ages, have helped me beyond words, and they don’t speak as though their vocal cords are on their last legs after over a century of use. If we could somehow chip away at this notion of “old ladies knitting,” we may be able to introduce an entirely new generation to a skill that can make their lives better.

And not for nothing, but when the women I know do make socks and post pics of them, they look pretty cute to me.

For more on PTSD and recovery, check out After 9/11.