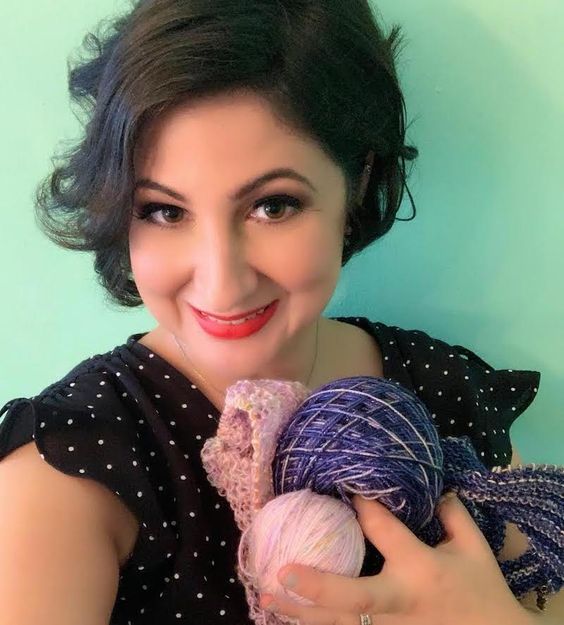 In honor of Worldwide Knit in Public Day, I decided to some digging on this question: have you ever been in public and had the passing thought of, “Is it rude that I’m knitting right now?”

Chances are, the thought didn’t occur to you while you were home alone watching TV or sitting on a park bench. But, maybe you were crocheting while waiting for a movie to start, or sitting through a community meeting, or on a crowded train, and someone gave you a look, or worse, several “looks.”  You may have been flat out reprimanded at some sort of gathering or function because someone else believed the answer was yes, it’s rude, and you needed to know how they felt about it.

We can likely agree that we wouldn’t pull out a project in the middle of a wedding or a funeral, or dinner with family (though maybe you would, and hey, we’re not judging).

But there is so much grey area out there that it warrants the question—what about when you’re “with company” or at a non-yarn specific gathering?

Well, first of all, knitting actually helps us stay more present in a social situation that might otherwise make us nervous or anxious, so while it looks like we’re distracting ourselves, we’re actually further grounding ourself into the present moment. But because other people may not know that, we run into some debate.

After crowd sourcing some feedback, it turns out that the majority of us feel it’s no worse than texting or using our phones in public. In fact, it’s even less of an offense, because at least we can still watch and listen to what’s happening around or in front of us. In other words, it’s not as disengaging.

We’ve knit at our kid’s swimming lessons and at the beach, during lectures and in waiting rooms. Often, we actually get compliments when doing this in public—lots of curious looks, or comments on how the onlooker used to knit and should take it up again, or the question, “Hey, what are you making?”

Even in the workplace, some of our bosses don’t even mind if we knit during meetings, but will give us a head’s up if a super-head-honcho is coming in, one who might not be as in-the-loop (no pun intended) about our ability to multi-task.

There are, of course, the kids who are embarrassed by pretty much everything we do anyway—one woman’s daughter said she thinks it’s rude even if they’re just sitting and watching TV together. “I told her don’t talk to me if it bothers her.” Sounds good to us.

However, there is the matter of nosy other parents—one woman, an activities director at her child’s school, dealt with a parent carrying on about how she “dared” to knit during the kid’s sports game.

This is where we enter the issue of “Does it look like I’m not paying attention when I should be?” Typically, this comes up when we’re part of an “audience” of some sort.

The majority of people agree on certain group situations where people have gathered to watch and listen to something specific, say, a performance in a theater, or a wedding, where it’s probably best to put the needles down. If even the mere perception of not giving your full attention to what’s going on affects the spirit of the moment when you should be reflective, attentive, and keep the mood solemn, use your best judgement.

And, while we may not realize it, our knitting could be a distraction to someone else—the sound, the movement—and we don’t want to inhibit someone else’s ability to pay attention, so it’s important to be mindful of the people around us. (Tip: most bamboo needles don’t make noise!)

Church has been a hot topic in the Facebook groups for some time. Is it rude to knit or crochet there? Some people say it’s a no-go, that people have told them it’s “God’s time.” One woman said that back in the day, her grandmother told her that every stitch she knit on Sunday would have to be taken out with her nose when she got to heaven. Yikes! Another woman left a church never to return again after a woman scolded her for working on a project. However, yet another woman said her Pastor loved that she knit and is trying to get a “fidget basket” program going for other members of the congregation.

When it comes to family time, people are also split. People have gotten the rare disapproving comment from their in-laws or even their spouse, again claiming that it’s taking attention away from them.

One woman said that her father finds the sound of the needles distracting while he’s driving, so that’s the only time she doesn’t knit.

That leads us to the real, definitive answer: there isn’t one.

There is only us sharing our experiences and using our best judgement. If you can’t sit through a 12-step meeting or a plane ride without your knitting, take it with you, and just be mindful that you’re not elbowing the person next to you.

We all have a pretty good gauge (again, no pun intended) of when something is or isn’t appropriate, and if we look deeply enough, we can tell whether we’re self-conscious about what other people think for no good reason, or, if our gut is saying, after taking the temperature of the room, that it’s best to hold off.

And hey, everything is relative…one woman said that when she dies, she literally wants everyone at her funeral to be knitting. “I want lively music and dancing and lots of fun happening. If my loved ones love me as much as I have loved them, then they WILL bring their knitting and crochet and celebrate my life by celebrating theirs.”

Helaina Hovitz is a native New Yorker, editor, journalist, and author of the memoir “After 9/11.” Helaina has written for over 50 publications including The New York Times, Forbes, Teen Vogue, Glamour, The LA Times, Huffington Post, Women’s Health, HEALTH, SELF, The LA Times, Business Insider, Newsweek, Reader’s Digest, and many more.