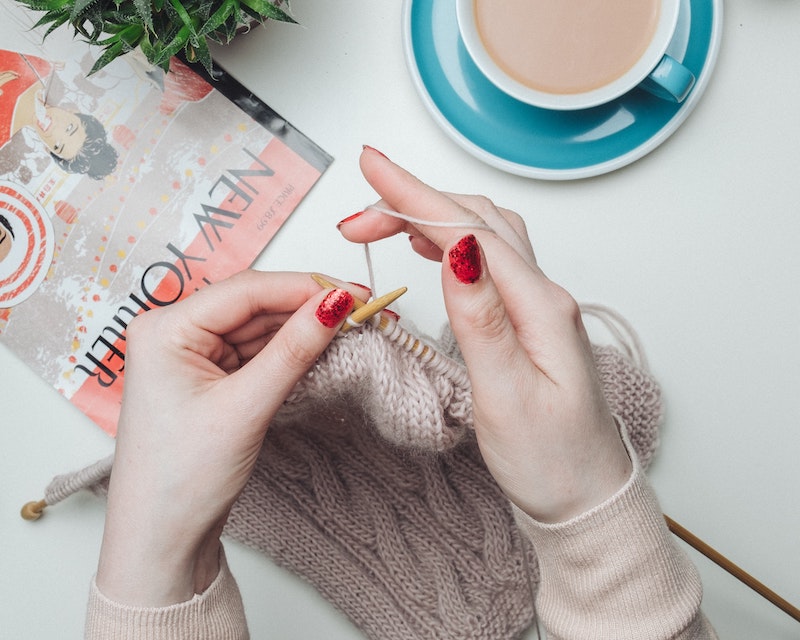 It seems like over the past year, the world has been catching on to the fact that regardless of age, race, gender identification, geographic location or social status, knitting is one of the most mindful, and healthy, hobbies you can pick up. Literally.

The craft is, in itself, a form of meditation that does all sorts of amazing things for your blood pressure, anxiety levels, self-esteem, and overall outlook on life.

“Knitting can help you manage everyday life, manage change, live with fluctuations in mood, keep stress at a health level, can literally change your mind and how you feel about yourself, your life and the world,” writes Betson Corkhill in her book,“Knit For Health And Wellness: How To Knit A Flexible Mind And More.Repetitive movement, Corkhill continues, raises serotonin, which can raise your mood—and even allow you to enter into a meditative state. 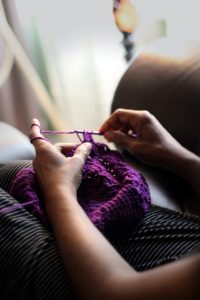 Studies supporting all of the above are not hard to find, and, a few nights ago, when getting ready to put down knitting to meditate, we suddenly realized that we actually had the tool needed to conduct an experiment of our own using this high-tech headband that tracks your brain activity and essentially tells you how “calm” you are during a set period of time.

The device is intended for use during meditation.The headband and the app “read” your brainwaves before and during meditation while playing  nature sounds ambient sound, or nothing at all…and it “reads” you by using something called electroencephalograph.

The measuring stick, as it were, is tracking “recoveries” which are times you feel your mind wander and bring it back to the present to try to quiet your mind, and bird sounds are triggered when you’re consistently calm for stretches at a time.

There’s a one-minute configuration time where the device reads your brain signals before you officially start, so it has something to measure against.

The experiment was simple.

Knit for that calibration minute, and continue for the entire four minutes, during which brain activity was being tracked.

We did it all again after that, but without knitting, instead just trying to focus on breath.

Both times, the mind wandered, but it wandered even more while knitting, thinking about things that had to be done, or was worried about, the usual. When not knitting and trying to focus on breath and the nature sounds instead, it was much more calm, focused, and centered, bringing attention back to the breath more often.

When knitting, we were calm 61% of the time, had zero “recoveries,” which meant we were at the same level of calm throughout, and acquired 15 “birds.”

We were shocked. When we actually focused on still, silent meditation, we felt that we consciously “thought” less and focused more, and even felt calmer. While knitting, when we had a “monkey mind” full of thoughts and felt a little less calm, we were actually in a more consistently calm state with less brain activity.

Ultimately, most technology is never without its flaws. In this case, what we’re looking at is that somehow, knitting kept our brain in a constant state of calm more consistently and for longer than sitting our eyes closed and not moving.

To be sure, we don’t think that knitting can necessarily “replace” traditional meditation, and that’s not what we set out to prove or disprove.

What we did find was an even more resounding belief that all of the studies leading to both present-moment anxiety reduction and future-focused benefits like improved memory, cognitive ability and overall level of happiness hold up.

If meditation, pared down to its bare-bones definition, is the practice of resting and clearing your mind so you can relax. It has its place alongside knitting, not in place of it, at least not for us.

The benefits and the results are different, and just because this headband told us the brain activity was “less” and calmer for longer doesn’t mean that the traditional form of meditation isn’t without an entirely different set of benefits that can’t be measured by a machine.

By the same token, we can more easily knit in public, on the train, in a car, while waiting for a doctor, etc., in lieu of sitting or standing with eyes closed in public, secretly waiting for some external factor to startle us and tell us to stop.

Ultimately, we can now lean in even further to the idea that knitting is not only a craft, hobby, pastime, cure for restless hands while watching TV and solution to tempering a lack of patience on public transit or while waiting for anything, but a major contribution to overall mental health and wellness—just ask those 15 birds. They’ll tell you.