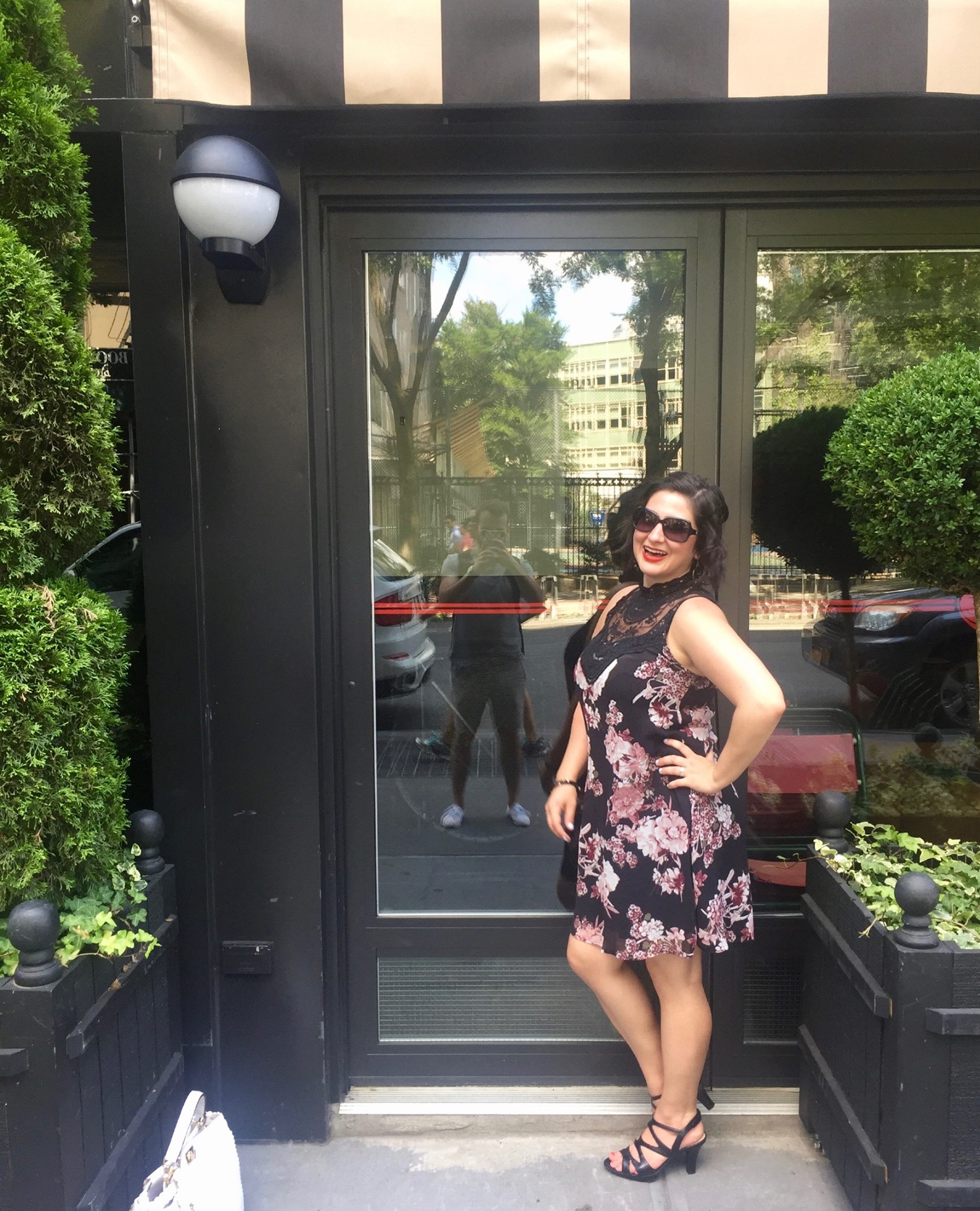 Looks like the folks at Discovery House are having technical difficulties….fear not! The interview is below!

Helaina Hovitz was one of several child survivors who got caught in the horrors of September 11th, 2001, as a 12-year-old girl living and going to school blocks from the World Trade Center. As she writes in her book After 9/11, One Girl’s Journey Through Darkness to a New Beginning, it was a long road to recovery, full of misdiagnosis, countless medications with painful side effects, and therapists that listened, nodded, and sent her on her way.

It would take years before she finally found answers about what was causing all of that chaos in her life—Post Traumatic Stress Disorder—and began to recover. A few years later, she found another path to recovery, this time, one that led her to sobriety and freedom from her addiction to alcohol and marijuana.

On Saturday, November 12, 2016, she’ll have five years sober—it would have been October 26, she says, but she had to finish all of the weed she had first.

When you have PTSD, you often feel like your brain, your body, your nervous system never let you rest. You’re constantly in this hyper-vigilant state of being, and things can feel pretty dark and desperate, even if, on the outside, you look “normal” as you try to carry on with your day-to-day life. It’s our inner world, as survivors, that can be most chaotic, so anything that brings some sort of solace or distraction from those feelings are naturally a welcome relief.

I was in college when I really started drinking in a way that is medically defined as “binge drinking” for women, but it seemed like everyone else around me was drinking the same way. Not so coincidentally, college was the time I finally found the right type of therapy for my PTSD. At the same time that I found myself doing hard work to recover with Cognitive Behavioral Therapy (CBT), I was also looking for that “break” from it all, that quick medicinal entry into feeling happy and accepted. I never drank deliberately to “forget” or “cope” and I certainly didn’t think I was drinking or smoking weed to “escape.” However, looking back, I can see the ways in which those words very accurately describe what I was chasing, a feeling of being carefree, a way to temporarily quiet the chatter in my head and blot out the constant feeling of being on-edge and anxious that I carried around with me.

I had what you’d call a “high bottom” by the time I hit “rock bottom.” I was never sent to rehab, I never committed any crimes, and I managed to graduate college with a 3.8 GPA, solid internships under my belt, and bylines not just in a local paper but in the New York Times. I didn’t drink every day or in the mornings, and there were periods in which I stopped for a long time or could indeed just have 1 or 2 drinks, so it wasn’t immediately apparent that I was an “alcoholic.”

The first of the red flags was how sick I got—deathly ill—and frequently, with hangovers lasting for hours and hours. It was so bad that I prayed to just be unconscious and always swore to never drink again. At the time, I always meant it: the alcohol poisoning got so bad, in some cases, that I had to be hospitalized several times. But despite how “intelligent” I was, and despite how bad I knew it could get, I always went back. It was the first drink that ultimately always did me in. It didn’t make any logical sense, which is why they call it a baffling disease.

More baffling still was the fact that alcohol and weed caused me to become even more sensitive to PTSD triggers, having the exact opposite effect I intended to get: when I smoked weed, I was often even more paranoid than I was when I was sober, and when I drank, I made bad choices that kept me stuck. In both cases, I was more prone to impulsivity and more vulnerable to severe reactions when triggered, like screaming, hysterical crying, even throwing and breaking things in that panic-induced state.

While I was making a ton of progress in CBT and then DBT (dialectical behavioral therapy), it was kind of like I was running around the finish line for a while instead of crossing it. My therapist hinted at it, several times, by saying, “You only have these episodes when you’re not sober.” But she never directly suggested a recovery program because she knew I had to come to that conclusion myself.

It’s a term that is often misused, like OCD or ADD, and it’s so crucial that we acknowledge that it’s a serious condition that affects millions of us, and not just veterans or victims of war crimes or mass shootings. One out of every two children in this country will be exposed to some sort of trauma, and it also affects people who live in dangerous neighborhoods, or live through natural disasters, or who live in a home where there is an alcoholic parent or domestic abuse taking place. There are people who survive medical trauma and sexual assault and witness horrific crimes. Of course, it also affects the people who love and care about those living with PTSD.

The second most important thing I wish people knew was that the symptoms can become incredibly complex, and sometimes take years and years to surface. Feeling, doing, thinking, behaving one way now can often present itself as one thing, but really be traced far enough back to reveal that it is a trauma-based reaction. When we live through trauma, our nervous system creates patterns of thinking and responding to the world that may not reveal its clear cause and effect or fight or flight response.

That’s why I wish more people would seek help for anything that just doesn’t feel right. There are some crummy therapists and psychiatrists out there just like there are crummy hair stylists and writers and chefs. That’s why we have to be so proactive about keeping hope alive and searching for answers and the right type of help so we can start to heal and take care of ourselves. Reaching out for help is not a sign of weakness, it takes more courage and strength to show a willingness to get better than it does to white-knuckle your way through life while suffering.

CBT was a pathway to actively creating meaningful change, distinguishing the differences between what I perceived to be threats of danger in the world around me and what the reality of it all actually was. PTSD takes such a toll on our daily lives, from our relationships to our morning commute and our physical health as well. CBT was an active learning process, and I had to challenge myself to practice new ways of thinking, communicating, behaving, perceiving, and coping to replace the faulty ones. Our brains and even our muscle memory go into autopilot as a way to try and “keep us safe” and this form of therapy helped me untangle that faulty wiring in my body and my brain that I’d been operating with for so long. Like learning anything new, we have to be taught how to grasp it, and we need to practice.

The difference is, instead of good grades as a reward, you get one step closer to positively changing the way you respond to the world around you and perceive your own place in it.

As for how it helped me get sober, too….firstly, it laid the groundwork for me to see clearly how my progress was stunted by my drinking and smoking pot. But the reason the 12-step method worked so well for me, I think, is because the method is so similar to the CBT approach. We don’t just “know” how to change for the better or become the people we want to be and live healthy, productive lives with meaningful relationships and fulfilling careers and personal lives, how to deal with difficult feelings without reaching for something outside of ourselves to soothe ourselves in the moment—or in some cases, deliberately self-destruct. We need a guide, we need social support, we need tools. I also think being so young (22 years old) and eager to change was useful…I always had that in me, this strong desire to find help and do whatever it took.

I would say it’s how that baseline mood of anxiety, agitation, and fear was replaced with this sense of calm, the space to feel actual joy. Recovery has allowed me to handle what life throws at me like an adult instead of a scared 12-year-old girl who had no idea how to handle anything. What has also changed is the quality of my relationships, both professional and personal, which are healthy, positive, and long lasting. Like anything that’s worth doing, it takes work and the willingness to be uncomfortable and build the capacity stay present through unpleasant, difficult and even painful feelings without reaching for a drink or a drug or a person. But if you’re willing to do what feels difficult, like responding with patience and kindness to people who don’t show the same courtesy to you, the way you experience life will change for the better. Peace of mind and a feeling of safety where there was once just internal chaos and darkness is the best gift I have ever given myself, and I definitely had to earn it.

We often need help figuring out how to make the transition from victim to survivor, because many of us don’t realize that we keep ourselves stuck in that role. We certainly don’t “want” to “play the victim,” but when we are convinced that people want to hurt us, that the world is unsafe and nothing can be trusted, can lead us to believe that, in fact, everything bad is just “happening to us.” Once you start to see the part you play in keeping ourselves “stuck” in a trauma-informed state, and once you know there is a way out, then you have a choice to make about the kind of life you want for yourself.

Helaina Hovitz is an editor, journalist, author and media start-up co-founder. Visit her at www.HelainaHovitz.com to read more of her work, or follow her on Facebook and Twitter