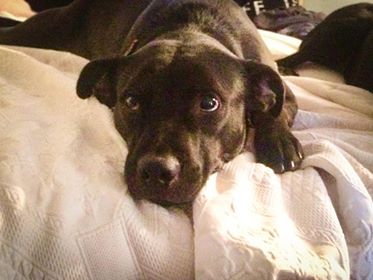 I don’t know about you guys, but when I see “lost dog” announcements on the Internets, I get really upset. Here’s the thing though: it means that there are people out there who care enough to help. A little over a week ago, Marigold, a 2-year-old lab mix being rescued by Friends With Four Paws, decided to go and get herself lost on what was then the coldest day of the year. Girlfriend, I don’t know what you were thinking, but you sure are lucky that so many good people are out there.

Marigold took off from foster mom Cindy’s house shortly after arriving and apparently, didn’t really feel like coming back. She kept taking off anytime she saw a family member. Rescues like us can be complex, and this poor little lady was pregnant and living on the streets when she was brought to a shelter, so my best guess is that she hadn’t learned to fully trust humans yet.

Everyone got to work, and fast. Volunteers posted over 100 fliers, called the vets and police, and posted on the town Facebook pages. They were inundated (you like that fancy word? I know you do) with support from the West Caldwell Police and local residents. Unfortunately, Marigold kept giving everyone indigestion every time she was seen running down very, very busy roads. The volunteer humans then set up several food stations and attempted to catch her that way, but she apparently wasn’t done running her marathon yet. She was seen sniffing and roaming around lawns, and one officer saw her playing with a ball at one point. But she was uncatchable.

About 100 people minimum were out in town trying to find her, and the rescue received about 5-10 calls a day with sightings.

On Friday, Jan 25, her foster-sister-human Lily celebrated her 23rd birthday, blew out the candles and said she hoped only her wish would come true—that Marigold would be found and brought home.

Thirty minutes later (I think it was 30 minutes, I’m just learning to tell time now) they received two calls that Marigold was back on the road of their home, but they knew all they could do was wait—the next day, they got a call from a neighbor that she jumped the fence back INTO someone’s backyard. When her foster humans arrived, she was leaned up against someone’s sliding glass door and she jumped into Lily’s arms.

Marigold is now warming up to her humans and attached to Lily, and is not allowed out in the yard. I hope she is being walked with 75 leashes by a group of 75 humans.

She also went on a celebrity appearance tour to meet a few of the officers that would frequently try to catch her and called daily with sightings and received a free spa day from the local groomer at Cloud Canine (I have mixed feelings about this because baths are evil).

“This restored my faith in people, especially in this town,” said Cindy. Added her daughter, Jess, “It’s amazing how a dog can bring so many people together. There’s no fighting or choosing sides when it comes to the safety of a dog.”

For more amazing dog stuff, check out my philanthropic online store, Wiley to the Rescue. I donate 50% of all proceeds to Friends with Four Paws!